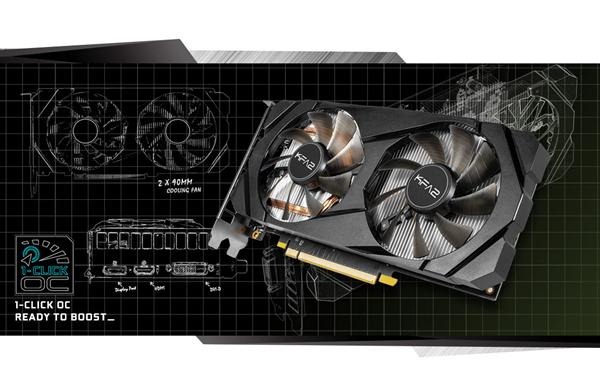 The KFA2 GeForce RTX 2060 Super graphics card has exactly the same features and features as the NVIDIA Founders Edition model. The only difference with the NVIDIA GeForce 2060 SUPER FE equivalent is that the KFA2 model has opted for a little more BOOST frequency, going from 1650 MHz of the FE model to 1665 MHz of this model. And when we activate the 1Click OC this speed increases to 1680 MHz.

This graphics card also mounts the TU106 chip (same as the RTX 2060 and the RTX 2070), a Turing architecture chip manufactured at 12 nm that includes Tensor Core for Artificial Intelligence (such as DLSS) and RT Cores for Ray Tracing, among many others. news

The interface used by this graphics card is PCIe 3.0, and it has the following video output ports: DisplayPort 1.4, HDMI 2.0b and DVI-D. 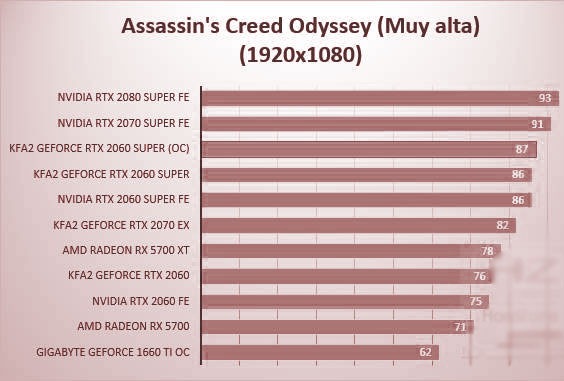 As for the cooling, FKA2 has opted for two 90 mm fans along with its own heatsink and backplate. This allows to improve the temperature at full capacity and, therefore, it is possible to overclock it.

If you want to know more information about the TURING architecture we recommend you to read the reviews of the NVIDIA FE:

The box of the new KFA2 GeForce RTX 2060 Super is practically the same as what we saw with the normal KFA2 2060. On the front we will find the model and a sticker that indicates that it is the 1-Clock OC model, while on the back we will find the main features of it, as it is prepared for 4K, it is compatible with Ray Tracing, ANSEL and that we can have control over it thanks to the Xtreme Tuner Plus software.

Inside this simple cardboard box we will find a slightly more robust one. Inside it we will be able to see the graphics card, inside an antistatic bag, a small quick start guide and a power cable. The first thing that will draw our attention to this graphics card is that, compared to other models that mount a triple fan, it is quite small and short. This guarantees us to be able to mount it even in the smallest towers without problems.

The fans are 90 mm and have 9 blades, which ensures proper air flow through the heatsink. The heatsink block is made of aluminum and has heat-pipes to improve heat transmission. The appearance of this graphics card does not hide any surprises. As we can see, the heatsink trim covers its entire surface. The only thing that stands out is, on one side, the GeForce RTX text. In addition, on that same side we will find the power pins. On the back we will find the connection panel with the DVI, HDMI and DP outputs.

Unlike NVIDIA FE, which is really complicated to disassemble, we can very easily separate the heatsink block from the board by removing only 6 Philips screws. 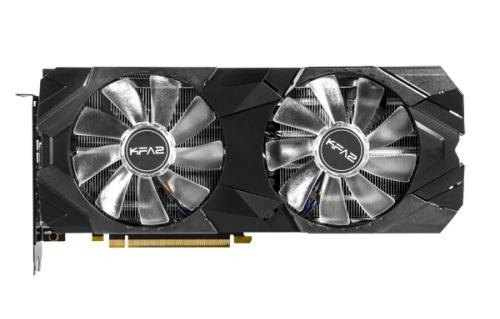 On the board we can find the GPU, which, as we have said, is a TU106-410-A1. We will also have the memory chips (Micron), the VRM and the rest of the components that shape this graphics card.

If we remove the screws from this board we can hold the backplate to see the back, or top of this graphics card. Both the backplate and the top are simple and do not have much to highlight in them.

To measure the performance of this graphics card we have used the same equipment as on other occasions, that is, an  Intel Core i7-8700K processor, 32 GB of 3200 MHz RAM, an ASUS TUF Z390-PRO Gaming motherboard and an NVMe, where we have installed the operating system, benchmarks and games. In addition, indicate that we have performed all the previous tests in the two modes offered by this graph. That is, we will have the standard result, and then the OC obtained by activating said mode of its application. 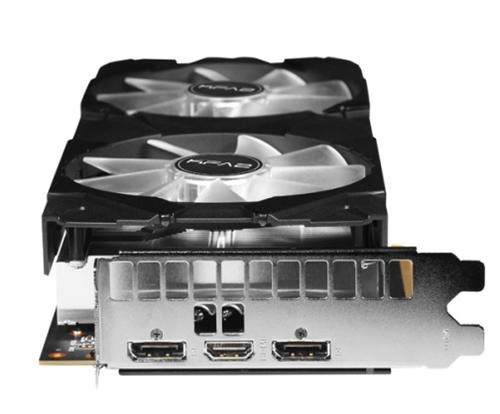 The first thing we are going to do is see all the technical specifications of this graphics card. For this we will use the GPU-Z tool, which will allow us to see all these specifications in detail. In addition, we will also show you the frequency and temperature values that have been recorded during the performance tests using this same tool.

When we activate the overclock using the tool provided by KFA2 we will improve the performance, but the temperature also increases. In any case, it does not exceed 80 degrees, so it is clear that the heatsink fulfills its function without problems.

How can it be seen, in this test it surpasses the AMD graphics, with which it rivals, and offers a performance somewhat below the NVIDIA RTX 2060 model but very much matched with the RTX 2070, even ahead of it.

This well-known test also serves to measure the performance of this graphics card with other tests and other different algorithms. We have tested the High, Extreme and 4K optimized configurations to be able to check without problems how this model performs.

We are also facing a very close fight in the mid-range. In these tests we can see a balance of performance between the 2060 SUPER models and the AMD Radeon 5700. In addition, when we overclock this KFA2 model it surpasses all, being just below the RTX 2070 SUPER, its older sister.

Benchmarks help us get an idea of how a graphics card yields, but what really shows the performance are the real game tests. In our case, as in the previous tests, we have chosen 4 games representative of the gaming sector and we have tested them with this card.

All tests have been carried out with the indicated configurations, without modifications, and at a resolution of 1920 × 1080, since it is the resolution most used by users today. 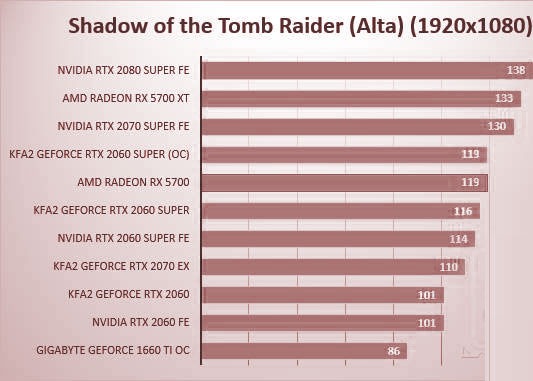 As we can see, this game is specially optimized for AMD, so Radeon’s performance is ahead. However, the 2060 SUPER of KFA2 also offers us an exceptional result, with the only direct rival being the 2070 SUPER.

The performance of this card in this great game is also excellent, especially when we activate the OC mode, being able to overcome the RTX 2060 SUPER of NVIDIA and the RTX 2070 of previous generation.

Final Fantasy XV
Although it goes without saying that this performance test is not reliable to measure the difference between NVIDIA graphics and AMD graphics, within the same manufacturer it does help us to get an idea of how the graphics card performs. Using the high quality and a resolution of 1920 × 1080, the values we have obtained are as follows. 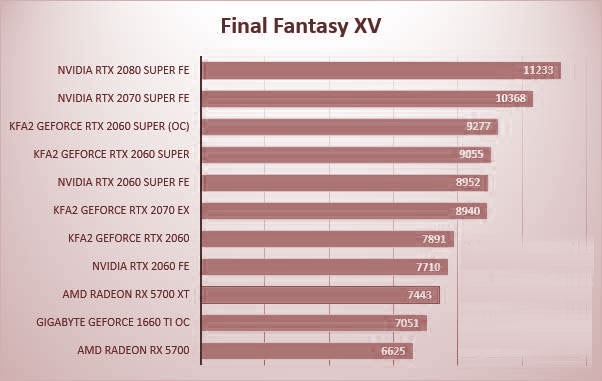 Likewise, the performance of this graphics card is excellent, and we can also see a significant performance gain when we activate the overclock.

As we can see, the results we have obtained are very similar to the rest of the tests. Without a doubt, the KFA2 GeForce RTX 2060 SUPER 1-Click OC will offer us excellent performance over any game, especially in those that already have Ray Tracing.

As we have seen in the performance tests, these graphics cards smoothly outperform the normal RTX 2060, even in many tests they match, or go through, the 2060 SUPER of NVIDIA. As if that were not enough, they leave the RTX 2070 without problems costing much less than what these graphs cost in their day. The OC mode with one click also allows us to take the performance of this graphics card to a new level, being surpassed only by the RTX 2070 SUPER and 2080 SUPER.

Aesthetically it is not the prettiest graphics card we can find. It has no special details and does not have RGB lighting as other manufacturers usually do. In return, KFA2 wanted to save costs to offer users the best performance at the best possible price.

Excellent performance.
Fans can be set to 0% when not necessary or by software.
Very quiet.
OC mode with one click that greatly improves performance.
Ray Tracing and DLSS, the new NVIDIA technologies.

It has no RGB lighting.
Double fan heatsink. Silent, but with OC the temperature reaches 80 degrees.
It has no SLI or NV-Link.
For all this, we have decided to give this graphic card KFA2 GeForce RTX 2060 SUPER 1-Click OC our platinum award, especially highlighting its quality / price.

Posted by Kamaldeep Singh on October 4, 2019 in Reviews