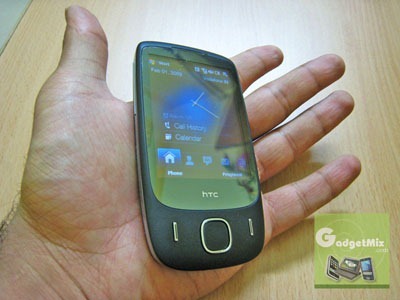 The HTC has been working diligently on it’s Touch range and has been unveiling some of the very high quality Windows Mobile devices from quite some time. The HTC Touch 3G is a powerful elder brother to the original HTC TOUCH. The HTC TOUCH 3G combines speed and style in an affordable package. Read the full HTC Touch 3G review to find out!

On the left side, you will find the volume buttons to increase or decrease the volume.

The back of the device is pretty plain. It just contains two holes for the camera and speaker respectively.

Build-wise, the HTC TOUCH 3G is made of high quality plastic. It does not squeeze from any side. It has the same rubbery soft finish that is found in original HTC TOUCH and TOUCH DUAL. Such finish prevents it from getting slipped from your hands.

The screen is same old QVGA (240 x 320), which is fine for most of the purposes unless you want to see a high resolution movie. The display is adequately bright and easy to see. The TouchFlo 2D (more on it later) looks amazingly similar to the TouchFlo 3D found on the HTC DIAMOND/Pro/HD. The screen is quite sensitive and does not require a lot of pressure to select the objects on the screen. 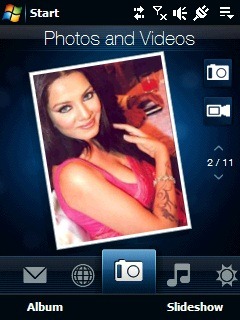 The HTC Touch 3G comes with a Qualcomm MSM7225 528MHz processor which is amazingly fast on it. While the HTC DIAMOND too is clocked at this frequency (but uses a slightly different CPU: MSM7201a), the HTC TOUCH 3G feels way faster than the Diamond. Most of the applications open within 1 or seconds, which is not bad at all.

Touch 3G is a modern quad-band phone with built in HSDPA, WiFi and Bluetooth including support for A2DP. It also comes with GPS built-in. The HTC has also put in a simple software which can mount the storage card as a removable drive. This enables you to transfer data to and fro from the computers which do not have Microsoft Activesync. USB is 2.0, which ensure you high data transfer rates but this is only used when using it as a removable drive. Activesync is much slower (as usual).

The TOUCH 3G also comes with a micro-SD slot. It is SDHC compatible, which lets you use upto 32GB storage card. 16GB micro-SD card are easier to get these days for fairly cheap prices, which can convert the TOUCH 3G into a great media player.

The TOUCH 3G comes with 1100mAh battery, which is able to give me nearly 2 days of battery life with good usage. HTC claims that it provides 6.5 hours of talk time or  15 days of standby time. Although, I do not think I will ever be able to achieve those numbers anyhow. But, the battery life is really good by Windows Mobile standards.

The camera has been bumped-up to 3.2MP now. It generates decent pictures. Sadly, it is not an auto-focus camera, but still it manages to produce great pictures provided you have good lightning conditions as there is no flash-light on the back. Here are a couple pictures taken by TOUCH 3G’s camera:

The HTC TOUCH 3G comes with Windows Mobile 6.1 OS. The HTC has made significant enhancement to enhance the overall usability of the OS. Let’s see these features one-by-one:

TOUCH FLO 2D: This concept first originated in the original HTC TOUCH has now undergone multitude improvements. It now covers the full screen and is geared towards one handed usability.

First tab is the home tab which shows a clock and your calendar information. The second tab is the “people tab” which is a like a photo speed dial where you can just tap on a photo to dial the number of that contact. It can contain upto 12 contacts.

The “Internet tab” contains your bookmarks, which when tapped launch the Opera Mobile 9.5 web browser, which performs great on it. Tapping on the big globe also launches the Opera Mobile. The other tab shown below is the “photos and videos tab”, which basically lists the photos contained in the my pictures folder of your device. Swiping up or down navigates you to the next picture.

Next is the music tab. You can swipe up or down to move to the next track. Then comes the “weather tab”, which can display weather of upto 6 cities.

HTC has bundled the same SIP (soft input panel) with HTC TOUCH 3G, which it bundled with the HTC DIAMOND. It makes typing messages easily without taking the stylus out of it’s silo.

The inclusion of Opera Mobile makes Touch 3G a great mobile internet device. The opera mobile shows the whole page to the user from where the user can double tap to zoom in into the area where he is interested. The Opera Mobile then automatically reflows the text so that the user can read the text easily without scrolling horizontally.

The TOUCH 3G is smaller in length than the Diamond. The stylus too is little shorter than the one found in Diamond.

Width-wise, they both appeared similar.

Compared to the latest HTC devices, the TOUCH 3G lacks:

accelerometer
no FM radio
no 3D graphic accelerator
no magnetic stylus (as found in Diamond)
Personally, none of the aforementioned points make me not like the TOUCH 3G. The HTC DIAMOND uses the 3D graphic accelerator for it’s today screen plugin: TOUCHFLO 3D only. The TOUCH 3G uses TOUCHFLO 2D, which actually feels much snappier than the 3D version. Although you miss some cool and snazzy animations, but you would not miss any functionality.

The pebble-shaped beauty from HTC is a great device to own. It is an awesome, yet affordable combination of performance and beauty packed into single package. Built-in 3G lets you cruise at high data speeds. Numerous HTC enhancements certainly do make the overall user-experience better. The TOUCH FLO 2D provides a pleasurable experience to the user. Couple all those goodies together with an affordable price tag, the HTC TOUCH 3G is a device not to be missed easily.