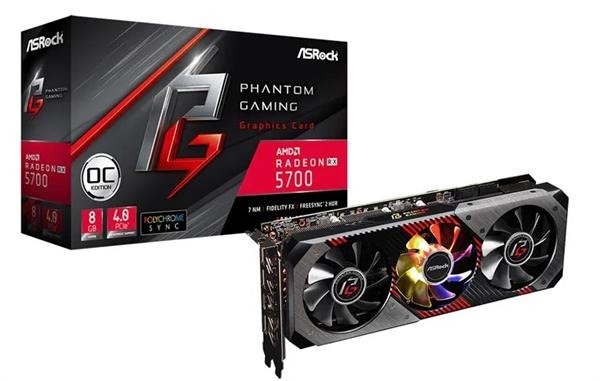 The new ASRock Radeon RX 5700 Phantom Gaming, come to complement its two current series. One of them is the AMD Radeon reference model of both graphics models. With the same blower type heatsink. And without any overclock. The second series, called Challenger, has a custom heatsink. But they still don’t have overclock any of the two models.

The new series exchanges the Challenger custom heatsink for a new one. A heatsink, with a width of 2.7 spaces. And that mounts a total of three fans. Not surprisingly, its external dimensions are 286.91 x 126.54 x 53.01 mm. Come on, this graphic is nothing small. And yet, its length of 287 mm makes it compatible with the vast majority of computer cases on the market. Which, we are sure will delight most users.

Speaking of compatibilities, the manufacturer recommends using a power supply at the least 600 W. Which is not much wonder. Since, this type of manufacturer models, usually consume enough power. Especially, since ASRock has overclocked the GPUs of both graphics cards.

In both models, the GDDR6 memory that it mounts is maintained at 14,000 MHz that the original AMD Radeon model has.

Together with the use of the three large fans, ASRock has implemented the “0dB Silent Cooling” function. Thanks to it, the graph commands fans to stop when their temperature is below a certain level. This allows the graphic to sound absolutely nothing when it has a low workload. Or when you are simply at the desk.

ASRock has not revealed the price that the new Radeon RX 5700 and RX 5700 XT Phantom Gaming will have when they reach the market.

Posted by Brooke on November 9, 2019 in Technology News