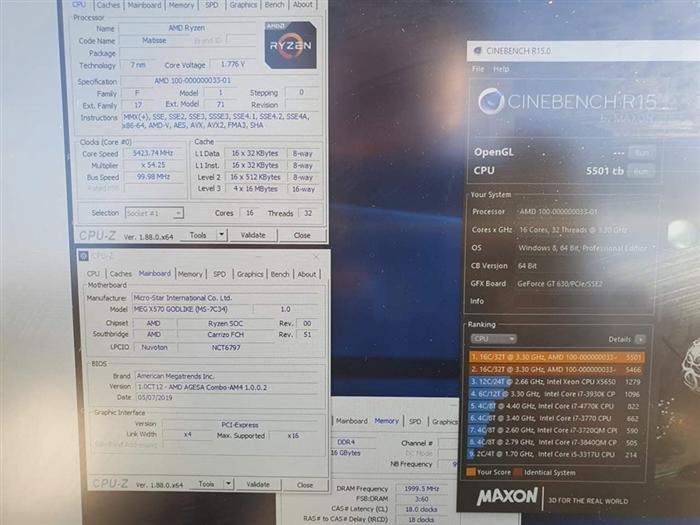 The scores of one of the upcoming AMD Ryzen 9 3950X processors (the first model of the Ryzen desktop architecture with 16 cores) have appeared on the Cinebench R15 benchmark. And in this benchmark it is far superior to the score that is achieved by the top processor of the Intel HEDT range. We are talking, of course, of the Intel Core i9-9980XE, which is a model that has two cores more than the AMD processor.

We have already talked about the new processor AMD Ryzen 9 3950X, and the revulsive that will be for the segment of desktop computers. A revulsive very similar to the one that involved the launch of the first range of Ryzen processors in this segment of the market. Equipped with 16 cores and 32 threads, this new processor will compete with the HEDT range of Intel processors (and AMD as well, with its Threadripper range).

However, AMD has not wanted to position this processor in the HEDT range because, currently, it has no rival in the desktop range that could overshadow it. The processor with the highest number of threads in this range is the Intel Core i9-9900K, which has half the threads of the next AMD model. Although it is also true that the price of the Intel model is significantly lower than the $ 749 that will cost the AMD Ryzen 9 3950X. But this price is also much lower than the $ 1,999 that the Intel Core i9 9980XE costs.

The first thing that catches the eye of the screen capture is that it is an engineering sample of the processor on which the benchmark has been made. Not only this, but it is an engineering sample that has been overclocked quite considerable, given that the frequency has been raised to 5,423.74 MHz. And using a Vcore whose value does not serve to be a overclock 24/7. 1.7 V of Vcore is a value that is well above what a processor like this can hold for daily use.

In any case, the capacity for overclock that supposedly would have the new processors of the AMD Zen 2 range is still remarkable. Above all, if we take into account that the previous versions of these processors were notable for not being processors that rose too much. It was something assumed among the users that the processors already came pretty squeezed from the factory. The fact is that the Boost frequencies they used have allowed them to achieve better performance than when they are overclocked for all their cores.

Posted by Mohit Sharma on July 6, 2019 in Technology