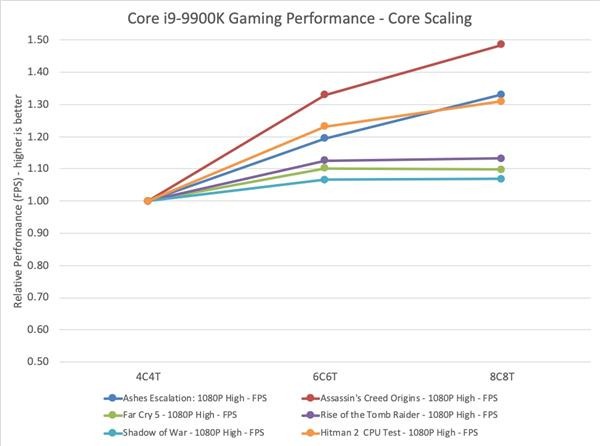 The war of the processors has only just begun between the two large companies, where each one focuses differently on the strategy to seize the market. In a new section as a battle, Ryan Shrout, Intel’s head of performance, has launched a poisoned dart towards AMD with its own performance tests, which states that adding more cores does not improve gaming performance.

From Intel, it has been assured by active and passive that the best processor for any task is one that balances all performance vectors, that is, a specific core count, frequency and IPC.

But for games, processors require a different kind of performance that breaks in some way with this “norm.” Shrout therefore claims that currently 8 cores is the optimal configuration for any current engine, while frequency is what drives performance.

To demonstrate this, Ryan has offered certain performance data with a scalability from 4 cores to 8 cores without HT, which helps eliminate the differences produced by this technology and better shows the performance escalation.

All processors have been set at a frequency of 4 GHz, which will help show the differences in the so-called Core Scaling.

As you can see, not all games are capable of climbing when it goes from 4 cores to 8 cores, where only half of them manage to do it successfully. In fact, from 4 to 6 cores the average difference is approximately 15% improvement, where shadow of War only achieves a 7% increase in performance, while ACO achieves 33% more performance.

The jump from 6 to 8 cores does not mean a drastic improvement, but rather the opposite, where, although 50% of the games achieve greater performance, the increase is less than when passing from 4 to 6 cores. 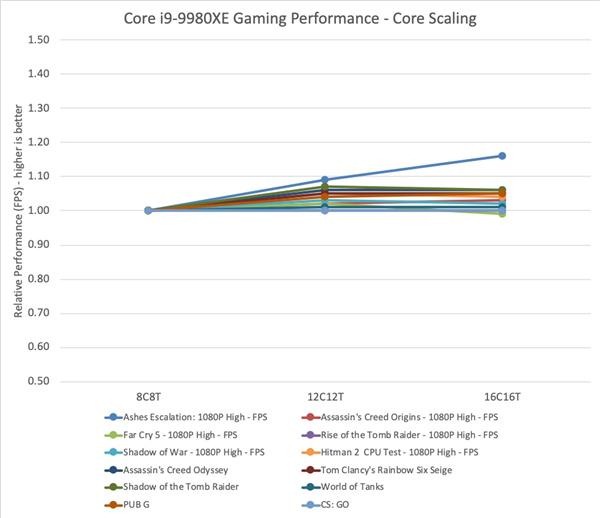 What will happen if we increase the number of cores to 12 and 16 cores without HT? Well, the improvement for the current cost of these processors is much less than seen previously.

Specifically and with a greater number of games to show greater variability of scenarios, the data is very revealing. The jump from 8 to 12 cores represents, in the best case, a 9% increase in performance, where in the vast majority it is between 0 and 3%.

If we jump from 8 cores to 16 cores, only one game is able to really scale (AOTSE), where it places its difference at 16%. In other cases such as Far Cry 5, this difference is reduced until the data is worsened by the minimum compared to the octacore.

This scenario of loss of performance is reflected in more games, where it is appreciated that the engines are not ready as a rule to deal with such a core count and therefore the disbursement for gaming is not justified.

Seen the data Ryan ensures that the i9-9900K is the best gaming processor in the world and that the new i9-9900KS is even faster.

Incidentally, it launches a poisoned dart towards AMD, since it ensures that a higher core count, just because it can be done, without a corresponding increase in the sustained frequency and design decisions necessary to feed these cores (such as low latency in RAM ) does not result in better performance.

He concludes by saying that game engines scale frequently and IPC, a space where Intel plans to lead the sector in the coming years.

Posted by Brooke on November 10, 2019 in Technology