Viewsonic will be launching its own 7-inch tablet running the latest Android 2.2 Froyo OS coming this Autumn. The tablet is rumored to have voice functionality via GSM (radio) and 3/5MP camera on its back. So, who wants a phone bigger than Dell Streak? 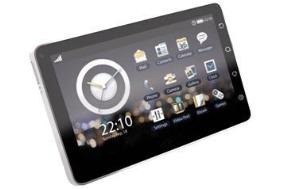 The tablet will be launched in UK for price somewhere between 300 and 400 pounds.

Not much is known about this Viewsonic tablet but we do know that it will feature a 7-inch display and run Android 2.2 operating system. It will also have a rear facing camera but we also know that there will no front facing camera.

We have also been told that there will be voice calling support along with 3G connectivity so you will be able to remain connected to high speed internet on the move.

Price is definitely on the high side. There is no word if it will be making its way to USA or not, but since there are already so many options like Samsung Galaxy Tab in US, why would anyone miss this?