Intel announced the 10th generation Core processor, which corresponds to the Comet Lake-S for desktop, and compatible chipsets, on the 30th (US time). At the same time, BIOSTAR has announced the Z490 chipset mother Z490GTN that supports Intel’s 10th generation Core processor. This is review of Biostar Racing Z490 GTN. This time, I was able to obtain the product in advance, so I will mainly tell you the product photograph. 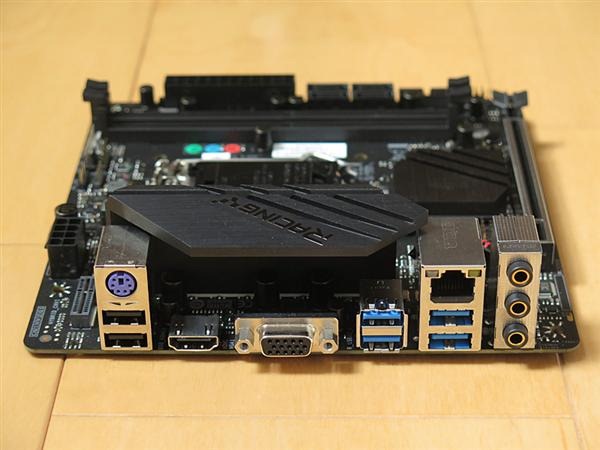 At the time of writing the article, I have not yet understood what the 10th generation Core is, but it seems that it is a Comet Lake-S that follows the Intel Skylake architecture and is improved. The architecture hasn’t changed, but the socket has been changed from the conventional LGA1151 to LGA1200, in anticipation of the next-generation CPU.

It seems that there is no change in a glance and it is compatible with the conventional CPU cooler for LGA 115x, but if you look closely, the central capacitor area of Biostar Racing Z490 GTN has shank horizontally by one column and vertically by one column. It has been increased by 39 pins. In the LGA1151 data sheet, N-AH in the 32nd column and 9-31 in the Nth row are the increased pins.

Of the remaining 10 pins on Biostar Racing Z490 GTN, there is a change in the number of 5 pins increasing in the upper right corner (32 to 36th in the AY line) and 8 pins in the upper left corner (31st to 38th line in the A line). Although it will be over 3 pins, the LGA 1200 has a notch for preventing incorrect insertion in the lower right of the socket, and it is 8 to 10 in the AY line in the LGA1151 data sheet, that is, it is exactly 3 pins less. This is 1,200 pins in calculation. Therefore, compatibility with the LGA1151 is completely lost mechanically and electrically.

Then, what are the increased pins used for in Biostar Racing Z490 GTN? Although the data sheet has not been published at the time of writing, the functions of each pin of the Intel CPU are basically a set, so it is possible to make some guesses.

For example, the increased pins of row N and row A are around the CPU core voltage (VCC), so they are likely to be used to strengthen the core voltage supply. This is probably because Comet Lake-S has more cores. On the other hand, in the 32nd column, since M to AB in the 31st column next to the 32nd column have the graphic score voltage (VCCGT), it is highly likely that this is also an implementation for supplying the graphic score current in view of the next-generation CPU.

The top and bottom of the AY column in Biostar Racing Z490 GTN are basically memory, so I think that the pins around it will move slightly, but it is a level that is almost the same.

Then, when I tried to find out what happened around this reinforced power supply, I could not understand at all without detailed information of ON Semiconductor’s PCP81229 used for the PWM controller.

However, the MOSFET NCP302155 driver  from the same manufacturer is used in the phase, and it can be seen that this is a high-performance product that can output up to 55A in the data sheet. Although Biostar Racing Z490 GTN is a Mini-ITX, it has a 9-phase power supply configuration, so it seems that it can withstand some overclocking.

Speaking of BIOSTAR products, until now, we often used parts from Taiwanese manufacturers around the power supply, and there was a glimpse of the cost reduction element, but at least when it comes to the Z490GTN, it is a famous part and reliability Seems to be rising (note that capacitors are still manufactured by APAQ TECHNOLOGY in Taiwan).

The feature is that it supports RGB LED lighting and has a microcontroller for controlling it. This machine is equipped with two eKTFS832 manufactured by Taiwan Elan Microelectronics, which can support both 5V / 3pin and 12V / 4pin. However, since there is only one terminal, if you try to control multiple LEDs, you need to devise a daisy chain connection.

The rear interface is USB 3.0 × 4, USB 2.0 × 2, HDMI output, mini D-Sub15 pin, Gigabit Ethernet, PS / 2, audio input / output only quite few. Wireless LAN is not installed as standard, but only the bracket for pulling out from the back panel and the antenna connection cable are attached. Therefore, if you want to use wireless LAN, you need to buy a module and antenna separately.

Biostar Racing Z490 GTN motherboard has one PCI Express slot and is reinforced with a metal cover. For M.2, it is mounted on the back of the board. Memory is DDR4 × 2, SATA is 4 units, fan pin header is 3 units (1 unit is for water cooling pump), and it is equipped with Mini-ITX.

Overall, the Biostar Racing Z490 GTN is a model with a high-end chipset called Intel Z490, but with a reduced number of interfaces and excessive mounting. Originally, the Mini-ITX motherboard has little expandability, but recently there are many products that have many functions implemented in advance to make up for the lack of expandability, so the price has risen and some are in a price range that is hard to reach. Not a few.

Among these, this product, which has the minimum functions, is expected to be launched at a reasonable price range, and will be a product of interest to users who want a reasonable and compact Comet Lake environment.