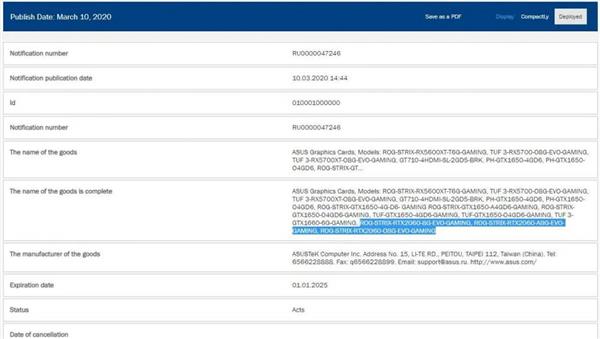 In a recent entry from the Eurasian Economic Commission (EEC), ASUS has registered three new RTX 2060 models that would represent an upgrade to this top-selling graphics card by NVIDIA, as they incorporate 8GB of GDDR6 VRAM instead of the 6 GB that have the RTX 2060 that are currently on the market.

The original GeForce RTX 2060 was equipped with the TU106 chip with 1920 CUDA cores and 6GB of 14Gbps graphics memory. A little later, the EVGA assembler “artificially” improved these graphics on its KO Gaming models using the TU104 chips, but the actual performance improvement was virtually negligible. This time, however, the RTX 2060 could receive a true and quite substantial update.

According to the EEC document, ASUS yesterday enrolled three new ROG STRIX GeForce RTX 2060 with 8 GB of GDDR6 VRAM, instead of the 6 GB that these graphics cards carry by default.

Before drawing conclusions, it is welcome to comment on the possibilities in this regard. On the one hand, it may be a human error when it comes to registering the graphics and that they do not actually have 8 GB of VRAM memory, although due to the names they have and the fact of being wrong three times in a row, it would not make much sense actually.

It would make sense if the ASUS person who entered these charts wanted to put RTX 2060 SUPER but forgot to put the “S” in the reference. It would also be somewhat illogical because then they would be registering references that have already been on the market for almost a year, since those same graphics but in the SUPER model already exist.

Another possibility is that ASUS is registering the part numbers beforehand in the event of a possible update of the RTX 2060 by NVIDIA. Remember that manufacturers can register as many products as they want in the EEC, and they do not necessarily have to be products that will later go on the market.

What market segment do these charts fit into?

If NVIDIA really does update these charts officially, they would catch up with the SUPER versions in terms of amount and speed of memory. The SUPER variant would still be better in terms of performance, as it must be remembered that it has 2,176 CUDA cores compared to the 1920 of the original RTX 2060s.

In terms of gross performance, these graphics are below AMD’s Radeon RX 5700 and RT 5600 XT (on average, RX 5700s are 11% higher), and we actually highly doubt adding 2GB of VRAM to these cards. graphics make it noticeably improve your performance; they will simply have greater clearance for very demanding games (very large maps) and at high resolutions.

In any case, having 8 GB of dedicated graphics memory will make the RTX 2060s a bit more attractive than before, especially if the price is maintained (which will remain to be seen because you already know how NVIDIA spends them). Answering the title question, these charts would remain in exactly the same niche as before, but would be more attractive and could boost your sales by adding more chart memory. If the price is maintained, it is great news for users, be that as it may.

Posted by Mohit Sharma on March 12, 2020 in Technology